Thank you to Harlequin Trade Publishing for providing me with an ARC in exchange for my honest review and letting me be a part of this blog tour. 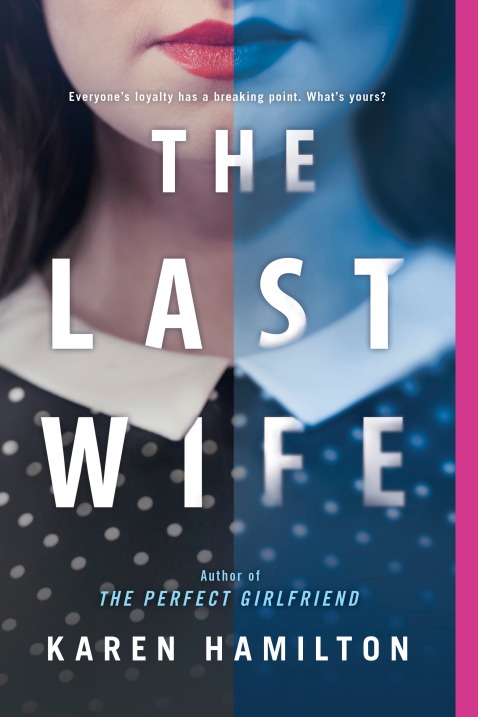 In Karen Hamilton’s shocking thriller, THE LAST WIFE (Graydon House, July 7, $17.99) Marie Langham is distraught when her childhood friend, Nina, is diagnosed with a terminal illness. Before Nina passes away, she asks Marie to look out for her family—her son, daughter, and husband, Stuart. Marie would do anything for Nina, so of course, she agrees.

Following Nina’s death, Marie gradually finds herself drawn into her friend’s life—her family, her large house in the countryside. But when Camilla, a mutual friend from their old art-college days, suddenly reappears, Marie begins to suspect that she has a hidden agenda. Then, Marie discovers that Nina had long suppressed secrets about a holiday in Ibiza the women took ten years previously when Marie’s then-boyfriend went missing after a tragic accident and was later found dead.

Marie used to envy Nina’s beautiful life, but now the cards are up in the air and she begins to realize that nothing is what it seemed. As long-buried secrets start surfacing, Marie must figure out what’s true and who she can trust before the consequences of Nina’s dark secrets destroy her.

This is a slow to build momentum mystery/thriller but about half way through the story things really started to pick up. I really enjoyed putting all the pieces together of what happened in Ibiza and who knew or didn’t know what. I wish the book had been more focused on that because I found a lot of the stuff pertaining to Marie’s life to be uninteresting. This book is written as very much in Marie’s head but since I didn’t really care for her (or any other character) it didn’t really work for me. This book also has some pacing problems where things and events just seemed to be glossed over and suddenly we were onto to something completely different. Overall, I’m happy I read it because I absolutely loved Hamilton’s debut, The Perfect Girlfriend, and I am excited to see what she comes up with in the future. If you are just a casual fan of mysteries/thrillers than this might not be the book for you, but you can check out an excerpt of the prologue and first chapter to test for yourself what you think of Marie down below!

Karen Hamilton spent her childhood in Angola, Zimbabwe, Belgium and Italy and worked as a flight attendant for many years. Karen is a recent graduate of the Faber Academy and, having now put down roots in Hampshire to raise her young family with her husband, she satisfies her wanderlust by exploring the world through her writing. She is also the author of the international bestseller The Perfect Girlfriend.

Clients trust me because I blend in. It’s a natural skill—my gift, if you like. I focus my lens and capture stories, like the ones unfolding tonight: natural and guarded expressions, self-conscious poses, joyous smiles, reluctant ones from a teenage bridesmaid, swathed in silver and bloodred. The groom is an old friend, yet I’ve only met his now-wife twice. She seems reserved, hard to get to know, but in their wedding album she’ll glow. The camera does lie. My role is to take these lies and spin them into the perfect story.

I take a glass of champagne from a passing server. I needn’t be totally on the ball during the latter half of the evening because by then, people naturally loosen up. I find that the purest details are revealed in the discreet pictures I snatch during the final hours, however innocuously an event starts. And besides, it seems this event is winding down.

The one downside of my job is the mixed bag of emotions evoked. I rarely take family photos anymore, so normally, I’m fine, but today, watching the wedding festivities, the longing for what I don’t have has crept up on me. People think that envy is a bad thing, but in my opinion, envy is a positive emotion. It has always been the best indicator for me to realize what’s wrong with my life. People say, “Follow your dreams,” yet I’d say, “Follow what makes you sick with envy.”

It’s how I knew that I must stop deceiving myself and face up to how desperately I wanted to have a child. Delayed gratification is overrated.

I place my camera on a table as the tempo eases and sit down on a satin-draped chair. As I watch the bride sweep across the dance floor with her new husband, I think of Nina, and an overwhelming tide of grief floods through me. I picture her haunted expression when she elicited three final promises from me: two are easy to keep, one is not. Nonetheless, a vow is a vow. I will be creative and fulfill it. I have a bad—yet tempting—idea which occasionally beckons me toward a slippery slope.

I must do my best to avoid it because when Nina passed the baton to me, she thought I was someone she could trust. However, as my yearning grows, the crushing disappointment increases every month and the future I crave remains elusive. And she didn’t know that I’d do anything to get what I want. Anything.

Ben isn’t at home. I used to panic when that happened, assume that he was unconscious in a burning building, his oxygen tank depleted, his colleagues unable to reach him. All this, despite his assurance that they have safety checks in place to keep an eye out for each other. He’s been stressed lately, blames it on work. He loves his job as a firefighter, but nearly lost one of his closest colleagues in a fire on the fourth floor of a block of flats recently when a load of wiring fell down and threatened to ensnare him.

No, the reality is that he is punishing me. He doesn’t have a shift today. I understand his hurt, but it’s hard to explain why I did what I did. For a start, I didn’t think that people actually sent out printed wedding invitations anymore. If I’d known that the innocuous piece of silver card smothered in horseshoes and church bells would be the ignition for the worst argument we’d ever had, I wouldn’t have opened it in his presence.

I don’t know what annoyed Ben more, the fact that he wasn’t deemed important enough to be named or that I said I was going alone.

“I’m working,” I tried to explain. “The invitation is obviously a kind formality, a politeness.”

“All this is easily rectifiable,” he said. “If you wanted me there, you wouldn’t have kept me in the dark. The date was blocked off as work months ago in our calendar.”

True. But I couldn’t admit it. He wouldn’t appreciate being called a distraction.

Now, I have to make it up to him because it’s the right time of the month. He hates what he refers to as enforced sex (too much pressure), and any obvious scene-setting like oyster-and-champagne dinners, new lingerie, an invitation to join me in the shower or even a simple suggestion that we just shag, all the standard methods annoy him. It’s hard to believe that other couples have this problem, it makes me feel inadequate.

One of our cats bursts through the flap and aims for her bowl. I observe her munching, oblivious to my return home until this month’s strategy presents itself to me: nonchalance. A part of Ben’s stress is that he thinks I’m obsessed with having a baby. I told him to look up the true meaning of the word: an unhealthy interest in something. It’s not an obsession to desire something perfectly normal.

I unpack, then luxuriate in a steaming bath filled with bubbles. I’m a real sucker for the sales promises: relax and unwind and revitalize. I hear the muffled sound of a key in the lock. It’s Ben—who else would it be—yet I jump out and wrap a towel around me. He’s not alone. I hear the voices of our neighbors, Rob and Mike. He’s brought in reinforcements to maintain the barrier between us. There are two ways for me to play this and if you can’t beat them…

I dress in jeans and a T-shirt, twist my hair up and grip it with a hair clip, wipe mascara smudges from beneath my eyes and head downstairs.

“You’re back,” says Ben by way of a greeting. “The guys have come over for a curry.”

“Sounds perfect,” I say, kissing him before hugging our friends hello.

I feel smug at the wrong-footed expression on Ben’s face. He thought I’d be unable to hide my annoyance, that I’d pull him to one side and whisper, “It’s orange,” (the color my fertility app suggests is the perfect time) or suggest that I cook instead so I can ensure he eats as organically as possible.

“Who’s up for margaritas?” I say with an I’m game for a big night smile.

The whole evening is an effortless success.

One thought on “Blog Tour: The Last Wife by Karen Hamilton”