I have been in the mood for all things thriller lately and I was so intrigued when I got the email with the synopsis of this book. I received this ARC from MIRA Books in exchange for my honest review. 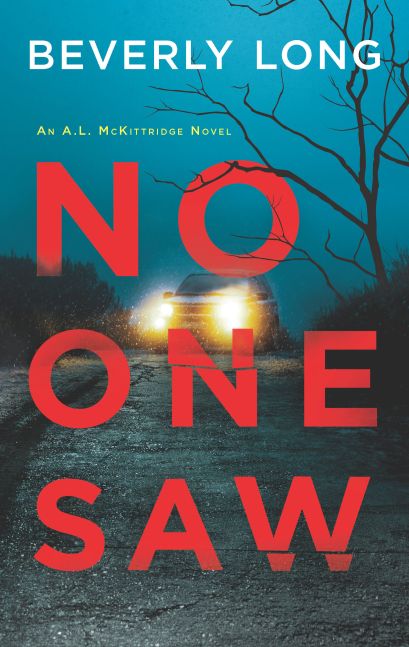 Detective team A.L. McKittridge and Rena Morgan are back on their beat after solving the brutal Baywood serial killings, but crime doesn’t rest for long in their small Wisconsin town. In book two of Beverly Long’s electrifying A.L. McKittridge series, NO ONE SAW (MIRA Mass Market Paperback; June 30, 2020; $7.99), a child seemingly vanishes from a day care into thin air and A.L. and Rena must race to bring her home before time runs out.

Baywood police department detective A.L. McKittridge is no stranger to tough cases, but when five-year-old Emma Whitman disappears from her day care, there isn’t a single shred of evidence to go on. There are no witnesses, no trace of where she might have gone. There’s only one thing A.L. and his partner, Rena Morgan, are sure of—somebody is lying.

With the clock ticking, A.L. and Rena discover their instincts are correct: all is not as it seems. The Whitmans are a family with many secrets, and A.L. and Rena must untangle a growing web of lies if they’re going to find the thread that leads them to Emma… before it’s too late.

This is one of the best detective mysteries that I have read in a long time. I read this book in one day because I was so hooked on the twists and turns of the story. I am usually really good at figuring out endings but this book had my on the edge of my seat the whole way through and I had no idea what was going to come next.

I enjoyed the characters A.L. and Rena and how hard they were working to solve this case. This book does a fabulous job of portraying a realistic view of what being a detective entails. I also appreciated that Long intersperses the story will the personal lives of both A.L. and Rena, which makes sense since this book is a part of a series. I feel like the addition of their personal lives was also great at building some suspense in the story because I just wanted to keep working at figuring out who took Emma.

If you enjoy detective novels then this is a great one to pick up. I am blown away by how well thought out and written the mystery was. There are so many different threads of where the story went and Long managed to piece it all together beautifully. Even though this book does give some details about what happened in the first book in the series, Ten Days Gone, I still really want to pick it up. If you want to get a sneak peak of the characters and story then keep scrolling for an except of Chapter One!

Beverly Long’s writing career has spanned more than two decades and twenty novels, including TEN DAYS GONE, the first book of her A.L. McKittridge series. She writes romantic suspense with sexy heroes and smart heroines. She can often be found with her laptop in a coffee shop with a cafe au lait and anything made with dark chocolate by her side.

With a week’s worth of mail in one hand, A.L. McKittridge unlocked his apartment door with the other. Then he dragged his carry-on suitcase inside, almost tripping over Felix, who had uncharacteristically left his spot by the window where the late afternoon sun poured in. He tossed the collection of envelopes and free weekly newspapers onto his kitchen table and bent down to scratch his cat. “You must have missed me,” he said. “Wasn’t Rena nice to you?”

His partner had sent a text every day. Always a picture. Felix eating. Felix taking a dump. Felix giving himself a bath. No messages. Just visual confirmation that all was well while he was off in sunny California, taking a vacation for the first time in four years.

I can take care of your damn cat, she’d insisted. And while he hadn’t wanted to bother her because she’d have plenty to do picking up the slack at work, she was the only one he felt he could ask. His ex-wife Jacqui would have said no. His just turned seventeen-year-old daughter, Traci, would have been willing but he hadn’t liked the idea of her coming round to an empty apartment on her own.

Baywood, Wisconsin—population fifty thousand and change—was generally pretty safe but he didn’t believe in taking chances. Not with Traci’s safety. She’d been back in school for just a week. Her senior year. How the hell was that even possible? College was less than a year away.

No wonder his knees ached. He was getting old.

Or maybe it was flying coach for four hours. But the trip had been worth it. Tess had wanted to see the ocean. Wanted to face her nemesis, she’d claimed. And she’d been a champ. Had stood on the beach where less than a year earlier, she’d almost died after a shark had ripped off a sizable portion of her left arm. Had lifted her pretty face to the wind and stared out into the vast Pacific.

She hadn’t surfed. Said she wasn’t ready for that yet. But he was pretty confident that she’d gotten the closure that she’d been looking for. She’d slept almost the entire flight home, her head resting on A.L.’s shoulder. On the hour-plus drive from Madison to Baywood, she’d been awake but quiet. When he’d dropped her off at her house, she hadn’t asked him in.

He wasn’t offended. He’d have said no anyway. After a week together, they could probably both benefit from a little space. Their relationship was just months old and while the sex was great and the conversation even better, neither of them wanted to screw it up by jumping in too fast or too deep.

Now he had groceries to buy and laundry to do. It was back to work tomorrow. He grabbed the handle of his suitcase and was halfway down the hall when his cell rang. He looked at the number. Rena. Probably wanted to make sure he was home and Felix-watch was over. “McKittridge,” he answered.

He let go of his suitcase handle. Something was wrong. “What’s up?” he asked.

Missing kid. Fuck. He glanced at his watch. Just after 6:00. That meant they had less than two hours of daylight left. “I’ll be there in ten minutes.”

The Lakeside Learning Center on Oak Avenue had a fancier name than building. It was a two-story building with brown clapboard siding on the first floor and tan vinyl siding on the second. There wasn’t a lake in sight.

The backyard was fenced with something a bit nicer than chain link but not much. Inside the fence was standard playground equipment: several small plastic playhouses, a sandbox on legs and a swing set. The building was located at the end of the block in a mixed-use zone. Across from the front door and on the left were single-person homes. To the right, directly across Wacker Avenue, was a sandwich shop, and kitty-corner was a psychic who could only see the future on Monday, Wednesday and Friday.

A.L. took all this in as he beached his SUV in a no parking zone. Stepped over the yellow tape and made a quick stop to sign in with the cop who was at the door.

everybody who entered and exited the crime scene.

Once he was inside, his first impression was that the inside was much better than the outside. The interior had been gutted, erasing all signs that this had once been the downstairs of a 1960s two-story home. There was a large open space to his right. On the far wall hung a big-screen television and on the wall directly opposite the front door were rows of shelves, four high, stacked with books, games and small toys.

It was painted in a cheery yellow and white and the floor was a light gray tile. There was plenty of natural light coming through the front windows. The hallway he was standing in ran the entire length of the building and ended in a back door.

There was a small office area to his left. The door was open and there was a desk with a couple guest chairs. The space looked no bigger than ten feet by ten feet and was currently empty.

He sent Rena a text. Here.

A door at the far end of the hallway opened and Rena and a woman, middle-aged and white, dressed in khaki pants and a dark green button-down shirt, appeared. Rena waved at him and led the woman in his direction. “This is my partner, Detective McKittridge,” she said to the woman. She looked at A.L. “Alice Quest. Owner and director of Lakeside Learning Center.”

A.L. extended a hand to the woman. She shook it without saying anything.

“If you can excuse us,” Rena said to the woman. “I’d like to take a minute and bring Detective McKittridge up to speed.”

Alice nodded and stepped into the office. She pulled the door shut but not all the way. Rena motioned for A.L. to follow her. She crossed the big room and stopped under the television.

“Emma Whitman is a five-year-old female who has attended Lakeside Learning Center for the last two years. Her grandmother, Elaine Broadstreet, drops her off on Mondays and Wednesdays between 7:15 and 7:30.”

Today was Wednesday. “Did that happen today?”

“I have this secondhand, via her son-in-law who spoke to her minutes before I got here. It did.”

The hair on the back of A.L.’s neck stood up. When Traci had been little, she’d gone to day care. Not at Lakeside Learning Center. Her place had been bigger. “How many kids are here?” he asked.

“Forty. No one younger than three. No one older than five. They have two rooms, twenty kids to a room. Threes and early fours in one room. Older fours and fives in the other. Two staff members in each room. So four teachers. And a cook who works a few hours midday. And then there’s Alice. She fills in when a staff member needs a break or if someone is ill.”

Small operation. That didn’t mean bad. “Where are the other staff?”

“Majority of the kids get picked up by 5:30. According to Alice, she covers the center by herself from 5:30 to 6:00 most days to save on payroll costs. Emma Whitman is generally one of the last ones to be picked up. Everybody else was gone tonight and she’d already locked the outside door around 5:45 when the father pulled up and pounded on the door. At first, she assumed that somebody else had already picked up Emma. But once Troy called his wife and the grandmother, the only other people allowed to pick her up, she called Kara Wiese, one of Emma’s teachers, who said that Emma hadn’t been there all day. That was the first time Alice had thought about the fact that the parents had not reported an absence. She’d been covering for an ill staff member in the classroom that Emma is not assigned to.”

2 thoughts on “Blog Tour: No One Saw by Beverly Long”