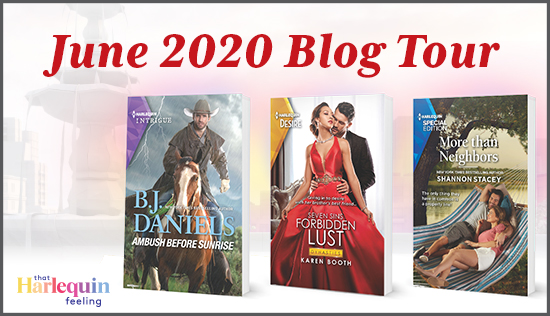 I’m thrilled to be bringing you the first of my two review/excerpt posts in partnership with Harlequin to promote their June releases. If you have been following me for awhile you know that I enjoy these short and fun romances so much.

FORBIDDEN LUST by Karen Booth (on-sale June 2, 2020): A secluded island resort is the perfect romantic setting for the night of passionate abandon Allison Randall plans to share with Zane Patterson. Her elder brother’s best friend has always been off-limits…and Zane is determined to keep it that way. But when a storm strands them together, neither can hold back. Everything Allison dreamed of is finally in reach…until unwelcome revelations threaten a rude awakening!

This is a really fun, sexy and sweet forbidden romance. I loved seeing how Allison and Zane tried to fight their attraction to each other but ultimately the chemistry between them was too strong. This book was paced really well and I loved how most of the book took place on the island but we also got to see these characters when they were back in their hometown. This romance isn’t only forbidden because Zane is best friends with Scott, who is Allison’s brother, but Allison is also secretly working for a company that Zane absolutely despises. I loved that this book had both of these elements since it kept the drama going the whole through since they had two obstacles to overcome. For some reason when Allison’s character was introduced I immediately got Jessica Wakefield vibes (hello Sweet Valley High) and for that reason I instantly connected to her. I also appreciated that Zane had a lot of different things he was working through and his reason for being so loyal to Scott made complete sense to me. If you want to get a glimpse of Zane then keep scrolling for an excerpt!

Also, this is book two in the Dynasties Seven Sins series that has a different author for every book. They all take place in the same world and can be read as standalone. I really liked Forbidden Lust so I went and bought the first book in the series, Ruthless Pride by Naima Simone. I also plan on keeping up with this series as they come out.

About Karen Booth: Karen Booth is a Midwestern girl transplanted in the South, raised on 80s music, Judy Blume, and the films of John Hughes. She loves to write big city love stories. When she takes a break from the art of romance, she’s teaching her kids about good music, honing her Southern cooking skills, or sweet-talking her super-supportive husband into mixing up a cocktail.

One man’s betrayal can destroy generations. Ten years ago, a hedge-fund hotshot vanished with billions, leaving the high-powered families of Falling Brook changed forever. Now seven heirs, shaped by his betrayal,  must reckon with the sins of the past. Passion may be their only path to redemption. Experience all Seven Sins!

Zane’s pulse skipped a beat as the aircraft floated down to the tiny landing strip and bounced its way to an abrupt stop. Another five hundred yards and they would’ve been in the ocean. Engines whirring, the plane taxied around to a modest outbuilding—yellow with a rust-red roof. The crew quickly opened the cabin door, and Zane whipped off his seat belt, sucking in his first sweet breath of Bahamian air. Sunglasses on, he surveyed the landscape from his vantage point at the top of the plane stairs. Palm trees rustled in the wind, and gauzy white clouds rolled across the seemingly endless stretch of azure sky. This was exactly what he’d needed. He knew it already.

A driver from Rose Cove, the boutique resort owned by Scott’s aunt and uncle, met him outside the airport building, and after a quick zip through customs, Zane was on his way to the marina in a golf cart. From there, a speedboat captain named Marcus took Zane for the two-mile trip to Rose Cove Island, off the southernmost tip of Eleuthera. The water was tranquil and clear, the wind buzzing through Zane’s ears as the boat sliced through the water and the sun blanketed him in warmth. He pulled his phone out of his pocket and powered it down. He had zero plans to look at it while he was in paradise. He not only needed to unwind, he wanted to disappear. Fall-ing Brook, the Lowell family and Black Crescent weren’t even a distant thought—they’d evaporated from his mind.

Pulling up to the dock at Rose Cove, Zane was struck by the beauty of the pink sand beaches from which the tiny private island got its name. Marcus directed him down a crushed-seashell path through a tropical forest so shaded by palm trees that it was a good ten degrees cooler. Colorful birds chirped and flitted from tree to tree, while the occasional lizard. skittered across the sandy ground to hide behind a rock. He eventually reached a clearing with a white single-story building of colonial architecture, with a porch that wrapped around the entire structure. In-side, Zane finally got to meet Scott’s aunt Angelique.

“Welcome to Rose Cove!” she exclaimed, rushing out from behind the check-in desk, wearing a beautiful turquoise sundress, flat sandals and her braided hair pulled up in a twist. Despite her enthusiasm, Angelique’s peaceful voice suggested that she lived her life at a pace far different from the rest of the world’s. “My nephew has told me so much about you.” She gave him a hug, showing the same warmth Zane had found in Scott’s entire family. He already felt at home here. He wasn’t sure he ever wanted to leave.

Angelique smiled wide. “He had nothing but great things to say.” She bustled back behind the counter and unfolded what appeared to be a map. “Here’s all you need to know about the island. This is the main building, where my husband, Hubert, and I live.” She circled a picture of the building where they were. “The ten cottages spoke out from here and are a good distance from each other for privacy. You’re in cottage number eight. You have a quiet stretch of beach, a hammock and a private plunge pool. There’s a beautiful king-size bed, a luxury bath and a fully stocked kitchen. Or our staff will bring you breakfast, lunch and dinner every day. Simply fill out the card waiting for you in your room. Until then, I invite you to relax and enjoy the island. Per-haps say hello to your neighbor in cottage nine. She’s been waiting for you to arrive.”

“A neighbor?” A she, no less? Perhaps this was Zane’s lucky day, although there was a part of him that knew his tendency to get lost in women was not his best trait. Really, he should be focusing on fishing and swimming while detoxing from social media and the internet.

“My niece, Allison. She arrived a few hours ago.” Zane’s jaw dropped so far he had to make a conscious decision to close his mouth. He was flabbergasted. What were the chances that he and Allison would end up on the island at the same time? “Alli-son is here. On this island. Right now.”

“Is there a problem?”

He shook his head so fast he nearly lost his sun- glasses, which were resting on top of his head. “Absolutely not. I love Allison. I’m just surprised. I’ll have to stop over and say hi.” He hadn’t seen Allison much in the years since he graduated from high school. He’d gone to college in North Carolina on a basket-ball scholarship, and when he returned to Falling Brook after four years, she was off to school in Los Angeles, where she stayed to start a business. She returned every Christmas, but Zane always seemed to be visiting his mom in Boston at the same time.

But three weeks ago Scott’s wife, Brittney, invited both Allison and Zane to a surprise birthday dinner she was having for Scott. Allison flew in for the weekend. The instant Zane saw her, he knew exactly how good the years had been to Allison—almost too good. She’d taken a straight line from cute to drop-dead gorgeous. Her long and wavy black hair was pulled back in a ponytail, showing off the incredible depth and warmth of her brown eyes. The chemistry of the entire room shifted when she smiled or laughed. He’d always found her interesting and a bit otherworldly, with a style and vibe all her own, but that night he was transfixed.

She’d surprised him many times when they were younger, like the day she got her nose pierced, but she’d flat-out shocked him that night at Scott’s house. She kissed him—soft and sensuous and so packed with sexy intent that he’d felt the earth shift beneath him. He was so conditioned to think of Allison only as his best friend’s little sister that he’d been wholly unprepared for Allison, the fully formed woman. And with Scott in the other room, a man to whom there would be no explaining, Zane had done the un-thinkable that night. He’d pushed beautiful, beguiling Allison away.

One thought on “Blog Tour: Forbidden Lust by Karen Booth”