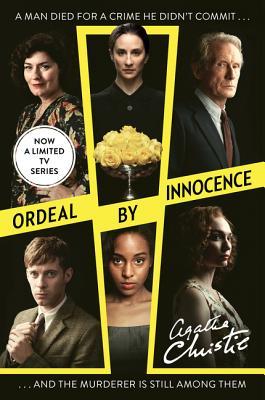 Pages: 198 (The edition shown above has 288 pages. The book I read has a plain hardcover and I thought the show tie in version was more appealing.)

Accused of bludgeoning his mother to death with a poker, Jacko Argyle had maintained his innocence throughout his trial, claiming he was hitchhiking on the night of the murder and had been picked up by a middle-aged man in a dark car. The police were never able to locate this mystery man—until he shows up a year later. But Dr. Arthur Calgary arrives too late to substantiate Jacko’s alibi. For after serving just six months of his life sentence, Jacko dies behind bars following a bout of pneumonia.

Feeling a sense of duty to the Argyles, Calgary is surprised when his revelations reopen old wounds in the family, leaving him to wonder if one of them is the real murderer….

Every time I read an Agatha Christie novel I am blown away by how well she could weave a story together. She wrote such interesting characters and such compelling plots. I read this book in two days because I was so engrossed in the mystery. I was slightly disappointed with this one though because this is the first Christie novel that I have read where I figured out the killer pretty early on. The journey to the reveal was so good though and I was constantly second guessing myself. I didn’t see the motive coming at all either so that was still surprising.

This book was written in the late 1950’s so a lot of the thinking on certain topics is pretty outdated. The main two being how a mixed race character was talked about/described and also adoption. If you are someone who stays away from classics that don’t age well (aka problematic) then I would suggest you try a different Christie novel. If you can look past it, this is a well done mystery that any fan of the genre will enjoy. Also, there is a miniseries based on this book on Amazon Prime. I haven’t had a chance to watch it but I plan to do so soon.

One thought on “Ordeal by Innocence by Agatha Christie”