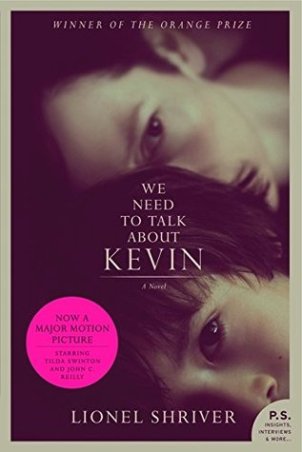 Title: We Need To Talk About Kevin

Now a major motion picture by Lynne Ramsay, starring Tilda Swinton and John C. Reilly,Lionel Shriver’s resonant story of a mother’s unsettling quest to understandher teenage son’s deadly violence, her own ambivalence toward motherhood, andthe explosive link between them reverberates with the haunting power of highhopes shattered by dark realities. Like Shriver’s charged and incisive laternovels, including So Much for That and The Post-Birthday World, We Need to Talk About Kevin isa piercing, unforgettable, and penetrating exploration of violence, familyties, and responsibility, a book that the Boston Globedescribes as“sometimes searing . . . [and] impossible to put down.”

This book is told through letters from Eva to her husband Franklin. The letters tell a chronological story of how, why and what happened to lead up to this horrible event. There is also a good sprinkling throughout the letters of what has happened post event. Telling the story this way is so brilliant because the letters are inherently intimate due to the nature of Eva and Franklin’s relationship. Also, Shriver has such a beautiful way with words where she can so easily show the reader Eva’s struggles with mothering Kevin.

Kevin is quite simply every parents worst nightmare. I can’t even imagine how anyone could parent a child like Kevin. Most of the letters center around how Eva can plainly see and feels from the beginning that something is not right with her son. On the other hand, Franklin has an excuse for everything that Kevin did and sometimes even encourages the behavior. It was infuriating to read sometimes because I just wanted to shake Franklin and scream at him to listen to his wife. It is not just Eva who can see that Kevin does not behave like he should but Franklin makes excuses about that too. My take on Franklin is that he had the biggest blinders on because he just loved Kevin so much that he actually wasn’t capable of seeing what everyone else could see.

I adored the character of Eva. I found her to be real and relatable. There are many instances in the book where Eva says she is a bad mother or questions what kind of a mother she is but I never once thought that she was a bad mother. I think that her husband influenced a lot of her negative thoughts about herself as a mother. I will even go so far as to say that Kevin might have turned out differently if she had been able to mother him the way she wanted. I see this book as a failure of the father and not the mother. It was so obvious to me that she was devoted to Kevin and even if she didn’t/doesn’t like Kevin she has still never turned her back on him. She was always there  with him and for him. One of the most consistent things in the book is that Eva is always trying with Kevin. Kevin truly does some awful stuff and there is his mother, always right in his corner. How can that not be love? Liking someone is not a prerequisite of love. Also, who knows how Kevin would have turned out if Eva was able to discipline him and set boundaries with him. I’m not saying that he would have been miraculously a good person (in my opinion Kevin was either born evil or was born with a severe personality disorder. The book never makes the distinction either way.) but maybe things wouldn’t have gone down the way they did.

The beginning of the letters I struggled a little bit to get through but the majority of this book I flew through. I am still giving this book 5 stars though because I ended up just really loving the story and Eva’s character so much. She is so misunderstood but at the same time she isn’t perfect and is paying for her downfalls as a mother. However, no parent is perfect and I think one of the big questions that runs throughout the book is how responsible is a parent for their child’s actions? Or to phrase it another way: how much is nurture and how much is nature?

This book has been made into a movie that I can’t wait to watch. I know I won’t like it nearly as much (we all know that movies are never as good as books) but it’s still fun to watch. The movie is on Amazon Prime if any of you stream movies on there.