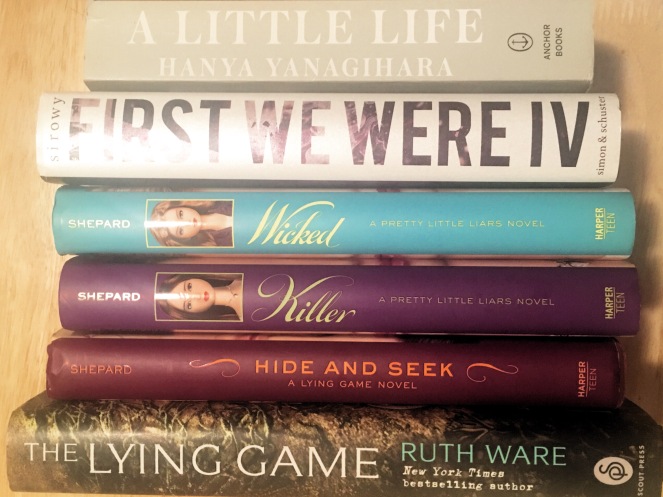 The show Pretty Little Liars recently ended and I was so disappointed that I have decided that I need to finally read the books. And then I found these two at the thrift store so I took it as a sign that I should start reading them asap.  I already had the first one on my iBooks because it was a free download awhile ago and I have found a couple of the other ones for cheap so I was excited when I found Wicked and Killer.

I picked up Hide And Seek because last month I found one of the books in this series at the Dollar Store. I have never watched the Lying Game show but it sounds intriguing and  they were both cheap so I figured why not.

Also at the thrift store I found A Little Life by Hanya Yangihara which I was probably the most excited about even though I don’t think I will be getting to this book anytime soon.

The Lying Game by Ruth Ware I had preordered because the synopsis gave me strong Pretty Little Liar vibes. I have been gifted her other two books, The Woman In Cabin 10 and A Dark Dark Wood, but I have never read them. I plan on reading this book next week after booktubeathon is over and maybe her other two shortly after that.

I recently read The Shining by Stephen King so I ordered the sequel, Doctor Sleep used off of Amazon. The spine came pretty broken but since I only paid a few dollars for it I’m not too upset by it.  I plan on reading this in October.

Let me know if you have read any of these and what you thought of them. Part 2 of this haul will be coming in a couple of days.