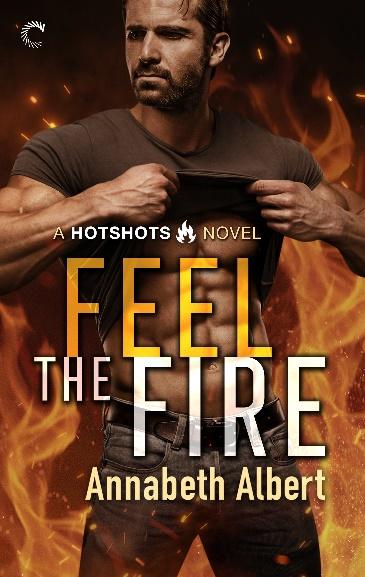 Book Description: The third installment of Annabeth Albert’s Hotshots series—the emotions and intensity of Chicago Fire with the raw, natural elements of Man vs. Wild.

When their career paths bring two high school sweethearts together again, the forest isn’t the only thing ablaze…

Fire behavior specialist Luis Riviera goes where his job takes him. But when he’s assigned to an arson investigation in Central Oregon—the place he left his broken heart twenty years ago—he’s afraid of being burned all over again.

Tucker Ryland had planned to join his first love, Luis, in LA after high school graduation, but life got in the way. Now a fire management expert and a divorced father of teen twins, Tucker’s thrown for a loop when he finds himself working side by side with his Luis, now all grown up and more intriguing than ever.

Though consumed by a grueling fire season and family responsibilities, the two men discover their bond has never truly broken. Tentative kisses turn to passionate nights. But smoking sheets aside, old hurts and new truths stand in the way of this time being the start of forever.

Danger lurks everywhere for Central Oregon’s fire crews, but the biggest risk of all might be losing their hearts. Don’t miss the Hotshots series from Annabeth Albert: Burn Zone, High Heat and Feel the Fire.

This is a heartwarming and sexy second chance romance. Luis and Tucker had instant chemistry and I love the slow burn angst that has the reader desperately wanting the characters to finally connect, both emotionally and physically. The best part of this romance was that most of the conflict came from Luis only being there temporarily for work and the parental drama that Tucker is dealing with. Since each character had their own issues that they needed to deal with as well as trying to figure out their relationships it made the story more layered and complex. The story and the characters were engaging enough that I finished this book quickly because I wanted to see how they were going to figure it all out. The fire aspect is always so interesting in this Hot Shots series and while I don’t really enjoy reading about fires (I live in an area where we unfortunately have lost whole towns to fires in recent years) I do like learning about all the various ins and outs that Firemen deal with. Luis, in particular, specializes in arson investigations and I appreciated the extra layer of drama that it brought to the story. Feel The Fire also has amazing Demisexual rep which is so important because I don’t think I have ever read a main character that identified that way. I also like that Albert highlighted two polar opposite ways a family can react to their son coming out and how they affects said person’s life. I highly recommend this book (and this series) to everyone especially if you are looking for a book world filled with diversity.

Annabeth Albert grew up sneaking romance novels under the bed covers. Now, she devours all subgenres of romance out in the open—no flashlights required! When she’s not adding to her keeper shelf, she’s a multi-published Pacific Northwest romance writer.

Emotionally complex, sexy, and funny stories are her favorites both to read and to write. Annabeth loves finding happy endings for a variety of pairings and is a passionate gay rights supporter.  In between searching out dark heroes to redeem, she works a rewarding day job and wrangles two children.

“I’m sorry, we’re getting who?” Tucker was usually all about getting through the morning meeting as quickly as possible, and he’d learned through years of working with Fred that too many questions would slow the boss down, lead to tangents and rambles and a lost morning he could have been working. And a lost morning meant being late getting out of here in the afternoon, meant another hasty dinner for him and the twins and grumbles all around. So he made a point of paying attention to the announcements and getting information right the first time, but this time he had to have heard Fred wrong.

“New fire behavior specialist out of California—Angeles National Forest is sending him since we’re still under a hiring freeze and now down to a bare-bones operation. You know all that. You were complaining about overtime last week.”

“I get that we need some more boots on the ground. But I’ve been working as burn boss the last several fires, and Garrick’s coming along too. Would be nice if they’d send us some more admin support and not someone who’s going to expect a leadership role.”

“Don’t get your feathers ruffled. You’re both an asset to incident command, sure, but we need this guy’s fire behavior experience, especially as it pertains to arson. He’s got the analytical skills we can use and the experience to back it up.”

“Glad they’re finally taking the arson suspicions seriously. And what did you say the name was?” That last part was what he really wanted to know. He could deal with the problem of too many chefs in the kitchen, but he could have sworn Fred had said—

“Luis Rivera. Comes to us with great experience.”

“Sounds good.” He managed a nod, even as his head swam. Fuck. Maybe there were a lot of guys with that name in the LA area. Maybe it was some stodgy near-retiree and not the darkest, deepest pair of eyes Tucker had ever known. The voice husky and earnest. The smile he’d never forget.

“Apparently he knows the area at least a little is what his boss told me on the phone.”

And with that, Tucker’s cornflakes and coffee turned to bricks in his stomach, a heavy weight he hadn’t felt in eons. There might be plenty of guys with that name in California but there had only been one Luis Rivera in central Oregon, the one who’d left with Tucker’s heart all those years ago.

“They’re making me go.” Luis’s voice had wavered, first time Tucker had seen him cry since he’d broken his arm back on a fourth grade dare, and even then, he’d been more mad than sad, all sputtering bravado. This was a level of devastation Tucker had never seen from his friend.

His chest hurt, like he was some hapless cartoon character and his heart really had been cleaved in half by this news. Scooting closer, he wrapped an arm around Luis’s slim shoulders, trying to be brave for both of them.

“You could stay with us to finish school. Share my room and—”

“I’m hardly your parents’ favorite person.” Luis’s weighty sigh hit Tucker like that time a swing had slammed into his gut, because he was right. Tucker’s parents weren’t going to come charging in to save the day.

Only Tucker hadn’t. And if it was that same Luis, well, there wasn’t going to be any avoiding him. As shorthanded as they were, it wasn’t like Tucker could claim some of his mountain of unused vacation days. Fred would want him working closely with this person. But maybe he could figure a way around—

“Should be here any minute.”

Or not. Damn it. He needed time to sort himself out, time he apparently wasn’t going to get because here came Fred’s assistant, Christine, knocking at the conference room door, ushering in…

Not the boy Tucker had known. A man. One with a couple of flecks of gray in his dark hair, which was neatly styled, not all choppy and goth, and he had a lean, muscular build, taller than him by a couple of inches, not some scrawny kid. His shoulders were solid, a man who had known his share of heavy labor, and the biceps peeking out of his forest service polo said he kept that work up. The edge of a tattoo played peekaboo with his sleeve. Tucker’s memory had miles of smooth tawny skin, no tattoos or scars like the one this guy had on his other arm.

But right when Tucker’s shoulders were about to relax, the pit in his stomach starting to ease, the guy frowned, and Tucker would recognize that hard, defiant look anywhere. Luis’s head tilted, revealing the familiar curve of his neck to his shoulder that Tucker remembered all too well.

“Tucker?” The Californian accent drew out the vowels in his name, an effect that could make him feel special and singled out when whispered on a starless night. But add a little disdain and a deeper timbre than Tucker recalled, and it made him feel like an unwanted extra in a surfing movie.

“Yeah.” He nodded, head feeling untethered, like a helium balloon about to escape.

“What the—” Luis blinked, then drew his shoulders back, professional distance taking over, smoothing his facial features and softening his next few words. “Sorry. Wasn’t expecting…”

Too small. Especially considering that he’d once seen the miles between them as an uncrossable sea, a distance so great it made his brain hurt almost as much as his heart. Once upon a time, he would have given anything to end up in the same room again, weeks of working together looming, and now he’d trade an awful lot to avoid it.

One thought on “Blog Tour: Feel The Fire By Annabeth Albert”

Follow Books With Cassie on WordPress.com
Join 881 other subscribers