I’ve mentioned before that I love watching TBR games on Youtube so I was so excited when one of my favorites, Becca & the Books, announced a 48 hour readathon based on her monopoly game. This readathon starts on July 11 BST time and ends when July 12 is over.I also think the way she has decided to do it is so fun because she is going to rolling for another prompt every 12 hours. So, this TBR post today will only be talking about the first prompts for the readathon since I obviously don’t know what the other ones will be. Here is the link to the official Twitter account with all the details and where the prompts will be announced. Becca has also decided to use her 2019 board as well as the one she made for this year so there is more variety for people to choose from. I have picked a book for each prompt but if I only manage to read one before the next rolls then I will just move on to the next set of prompts. Also, I am not sure if my math is correct but I want to start the readathon when it officially starts and I am almost positive that would be 4pm Pacific time. I could be totally off but I’m hoping on Friday there will be some sort of countdown on Twitter to help me!

Next Saturday I will be sharing my mid year update on how I have been doing with Romanceopoly and also sharing my July rolls since I didn’t add them to my monthly TBR. I bring it up because I will be using my Romanceopoly books to fulfill the prompts for BookopAthon.

2019 Board- Paranormal or Magical Realism 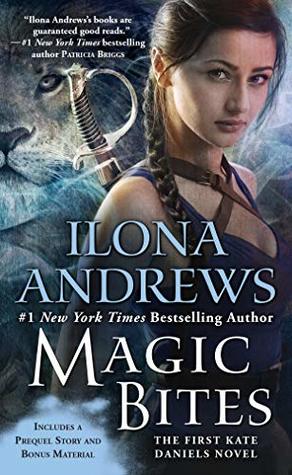 The world has suffered a magic apocalypse. We pushed the technological progress too far, and now magic returned with a vengeance. It comes in waves, without warning, and vanishes as suddenly as it appears. When magic is up, planes drop out of the sky, cars stall, electricity dies. When magic is down, guns work and spells fail.

Atlanta would be a nice place to live, if it weren’t for magic… One moment magic dominates, and cars stall and guns fail. The next, technology takes over and the defensive spells no longer protect your house from monsters. Here skyscrapers topple under onslaught of magic; werebears and werehyenas prowl through the ruined streets; and the Masters of the Dead, necromancers driven by their thirst of knowledge and wealth, pilot blood-crazed vampires with their minds. In this world lives Kate Daniels. Kate likes her sword a little too much and has a hard time controlling her mouth. The magic in her blood makes her a target, and she spent most of her life hiding in plain sight. But when Kate’s guardian is murdered, she must choose to do nothing and remain safe or to pursue his preternatural killer. Hiding is easy, but the right choice is rarely easy…

I put all six of these books into my wheel app and spun the wheel and I was so excited when Beach Read won. I have been wanting to read this book for months so it will definitely be my first read of the readathon.

A romance writer who no longer believes in love and a literary writer stuck in a rut engage in a summer-long challenge that may just upend everything they believe about happily ever afters.

Augustus Everett is an acclaimed author of literary fiction. January Andrews writes bestselling romance. When she pens a happily ever after, he kills off his entire cast.

In fact, the only thing they have in common is that for the next three months, they’re living in neighboring beach houses, broke, and bogged down with writer’s block.

Until, one hazy evening, one thing leads to another and they strike a deal designed to force them out of their creative ruts: Augustus will spend the summer writing something happy, and January will pen the next Great American Novel. She’ll take him on field trips worthy of any rom-com montage, and he’ll take her to interview surviving members of a backwoods death cult (obviously). Everyone will finish a book and no one will fall in love. Really.