I wasn’t planning on participating in any readathons this month but when I saw this one I knew that I needed to do it. I have so many books on my shelves (and my Kindle but that is a beast for a different day!) that I need and want to read so this is the perfect opportunity for me to do so. The readathon starts Monday, March 9, and goes through Sunday, March 15. I will link the twitter account here because there are so many wonderful hosts that I don’t want to leave anyone out. As usual with my readathon TBR’s I will be picking a book for each prompt and trying to read as many as possible. Most of the books that I picked are ones leftover from December’s magical readathon since this month I really want to get all those books read so they aren’t hanging over me anymore. Plus, I picked them back in December because I really want to read them! 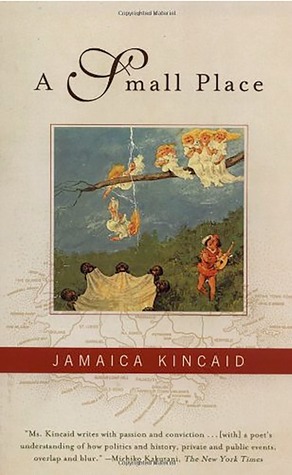 Lyrical, sardonic, and forthright, A Small Place magnifies our vision of one small place with Swiftian wit and precision. Jamaica Kincaid’s expansive essay candidly appraises the ten-by-twelve-mile island in the British West Indies where she grew up, and makes palpable the impact of European colonization and tourism. The book is a missive to the traveler, whether American or European, who wants to escape the banality and corruption of some large place. Kincaid, eloquent and resolute, reminds us that the Antiguan people, formerly British subjects, are unable to escape the same drawbacks of their own tiny realm—that behind the benevolent Caribbean scenery are human lives, always complex and often fraught with injustice.

A Book That Intimidates You

I started this book last year and I flew through the first part of it and really loved it. The second part is almost like a different book and while it makes perfect sense story wise I am really struggling to finish it. I have picked it up once since I put it down but I’m having a hard time imagining the world. Which is very much a me problem since this is hard sci fi and I’m hoping that if I just push through it I will be captivated by the story.

What would happen if the world were ending?

A catastrophic event renders the earth a ticking time bomb. In a feverish race against the inevitable, nations around the globe band together to devise an ambitious plan to ensure the survival of humanity far beyond our atmosphere, in outer space.

But the complexities and unpredictability of human nature coupled with unforeseen challenges and dangers threaten the intrepid pioneers, until only a handful of survivors remain . . .

Five thousand years later, their progeny—seven distinct races now three billion strong—embark on yet another audacious journey into the unknown . . . to an alien world utterly transformed by cataclysm and time: Earth.

A writer of dazzling genius and imaginative vision, Neal Stephenson combines science, philosophy, technology, psychology, and literature in a magnificent work of speculative fiction that offers a portrait of a future that is both extraordinary and eerily recognizable. As he did in Anathem, Cryptonomicon, the Baroque Cycle, and Reamde, Stephenson explores some of our biggest ideas and perplexing challenges in a breathtaking saga that is daring, engrossing, and altogether brilliant.

A Book That Someone Recommended To You

My son has been nagging me to read this since he finished it so I’m looking forward to reading it and talking it over with him. He has also read the sequel and is impatiently waiting for the third book in this series to come out.

Morrigan Crow is cursed. Having been born on Eventide, the unluckiest day for any child to be born, she’s blamed for all local misfortunes, from hailstorms to heart attacks–and, worst of all, the curse means that Morrigan is doomed to die at midnight on her eleventh birthday.

But as Morrigan awaits her fate, a strange and remarkable man named Jupiter North appears. Chased by black-smoke hounds and shadowy hunters on horseback, he whisks her away into the safety of a secret, magical city called Nevermoor.

It’s then that Morrigan discovers Jupiter has chosen her to contend for a place in the city’s most prestigious organization: the Wundrous Society. In order to join, she must compete in four difficult and dangerous trials against hundreds of other children, each boasting an extraordinary talent that sets them apart – an extraordinary talent that Morrigan insists she does not have. To stay in the safety of Nevermoor for good, Morrigan will need to find a way to pass the tests – or she’ll have to leave the city to confront her deadly fate.

You Were The Most Excited About

The Redbreast is a fabulous introduction to Nesbø’s tough-as-nails series protagonist, Oslo police detective Harry Hole. A brilliant and epic novel, breathtaking in its scope and design—winner of The Glass Key for best Nordic crime novel and selected as the best Norwegian crime novel ever written by members of Norway’s book clubs—The Redbreast is a chilling tale of murder and betrayal that ranges from the battlefields of World War Two to the streets of modern-day Oslo. Follow Hole as he races to stop a killer and disarm a ticking time-bomb from his nation’s shadowy past. Vogue magazine says that “nobody can delve into the dark, twisted mind of a murderer better than a Scandinavian thriller writer”…and nobody does it better than Jo Nesbø! James Patterson fans should also take note.

A Book With Blue On The Cover 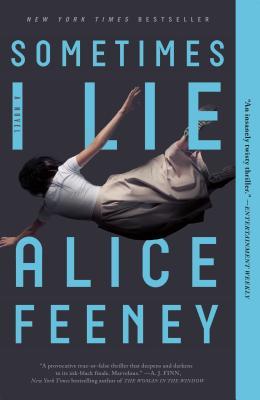 My name is Amber Reynolds. There are three things you should know about me:
1. I’m in a coma.
2. My husband doesn’t love me anymore.
3. Sometimes I lie.

Amber wakes up in a hospital. She can’t move. She can’t speak. She can’t open her eyes. She can hear everyone around her, but they have no idea. Amber doesn’t remember what happened, but she has a suspicion her husband had something to do with it. Alternating between her paralyzed present, the week before her accident, and a series of childhood diaries from twenty years ago, this brilliant psychological thriller asks: Is something really a lie if you believe it’s the truth?