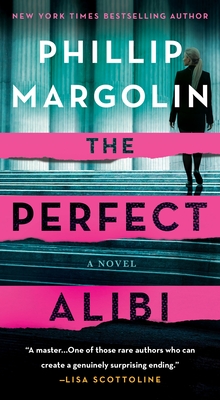 This is the second book in a crime thriller series. The books can be read as a standalone but you obviously get more of the background if you start with the first book. This book follows lawyer Robin Lockwood as she works through a few cases. The case referenced in the synopsis  is that of a rape victim who wants to sue her rapist but things become complicated when his DNA shows up in another rape case while he is sitting in jail.

I already wanted to read this book since I liked the first one so much and I was intrigued by the synopsis but that story ended up being pretty self explanatory and nothing shocking came from that case. This book is really about all the other stuff that happens in the periphery of that one case. And all that other “stuff” was pretty dramatic and compelling which is exactly what I wanted out of this book.

Margolin writes in the same vein as James Patterson with short chapters that keep the story moving forward at such a quick pace. I read this book so quickly because the drama and the suspense were addicting. Robin Lockwood is a great protagonist and she is so easy to root for. She is a great centering force for this book especially when things become overly dramatic and over the top. Which is also much in line with Patterson’s way of telling a story and is very entertaining but can be overwhelming at times.

There was also a bit of romance in this book and for me that was a turn off. There was no real relationship building between the two and instead we would just get random moments of them together. Their relationship also seemed to be so serious and move so fast which for me was just a distraction because I was constantly confused by the sincerity of the relationship. I liked how the characters were in the first book and since this is a series I’m not really sure why everything was so rushed between them in this book.

Clearly this book would be great for fans of James Patterson but I also think someone who wants an easy to read crime thriller would enjoy this. It doesn’t delve too much into the technical details of the law like some books do. (Check out my review coming out tomorrow if that is more your type of thing.) The third book in this series comes out next month so you have plenty of time to catch up on the first two books in the series.

One thought on “The Perfect Alibi by Philip Margolin”

Follow Books With Cassie on WordPress.com
Join 867 other followers