Thank you to Netgalley and Harper for allowing me to read this book for free in exchange for my honest review. 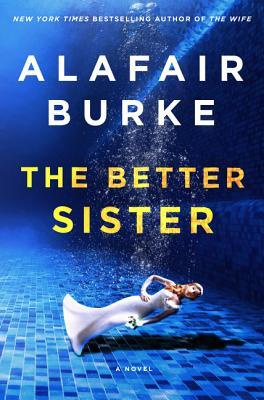 From Alafair Burke—New York Times bestselling author of the runaway hit, The Wife—comes another twisty tale of domestic noir. When a prominent Manhattan lawyer is murdered, two estranged sisters—one the dead man’s widow, the other his ex—must set aside mistrust and old resentments . . . but can they escape their past?

Though Chloe was the younger of the two Taylor sisters, she always seemed to be in charge. She was the honor roll student with big dreams and an even bigger work ethic. Nicky was always restless . . . and more than a little reckless—the opposite of her ambitious little sister. She floated from job to job and man to man, and stayed close to home in Cleveland.

For a while, it seemed like both sisters had found happiness. Chloe earned a scholarship to an Ivy League school and moved to New York City, where she landed a coveted publishing job. Nicky married promising young attorney Adam Macintosh, and gave birth to a baby boy they named Ethan. The Taylor sisters became virtual strangers.

Now, more than fifteen years later, their lives are drastically different—and Chloe is married to Adam. When he’s murdered by an intruder at the couple’s East Hampton beach house, Chloe reluctantly allows her teenaged stepson’s biological mother—her estranged sister, Nicky—back into her life. But when the police begin to treat Ethan as a suspect in his father’s death, the two sisters are forced to unite . . . and to confront the truth behind family secrets they have tried to bury in the past

The beginning of this book I was disappointed because it was resembling a book that I had recently dnf’d but thankfully it made a sharp right turn and got a lot better. The reason I didn’t like the beginning is because the author, Burke, heavily took from current events, which is fine by itself, but when page after page is the the main character, Claire,  thinking all these thoughts about current events and no actual story building is being done it got to be annoying. What Claire does is an important part of the story but it is not necessary to spend so much time on just building up her character when the author would have been better off building up the relationships that she has with the people around her. We know from the synopsis that Claire’s husband, Adam, is murdered but we don’t get to see much of their relationship before that happens. Which, if I had a choice in how the author started this book I would much rather they spent their time on Claire and Adam and not Claire and all the amazingness that she has done with her magazine.

Once the story really got going though it was a fantastic thriller. There were a lot of twists and turns and I loved watching the story unfold. If thrillers aren’t a favorite genre of yours then you might find some of the plot overdone with all the different reveals. For someone like me, who loves mysteries and thrillers, than this will be a fun adventure for you.

I also really enjoyed the pacing of this book. This book would jump forward in time at different plot points and I really felt like it kept the book from getting too stale. It also helped it to feel more realistic since everything wasn’t happening in the span of a few days. Burke also did a great job of balancing all the drama and different storylines that were happening. We know going into it that their is obviously some drama with Claire and her sister and I liked how their relationship unfolded throughout the story. Going between the drama between them, the mystery of who killed Adam and Claire trying to deal with the police and social media kept me engaged in the story.

Overall, this was a really well done thriller/mystery and I highly recommend that anyone who enjoys this genre check this book out. If you like Law & Order: SVU I also think that you would like this book. It follows the basic narrative of the episodes where there is a crime, the police investigate and then there is a court case. Also, I know I spent some time talking about how I didn’t really like the beginning but the rest of the book more than made up for that.