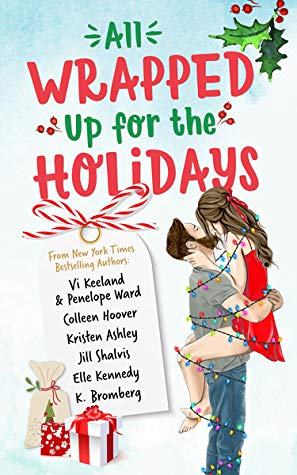 The Merry Mistake by Vi Keeland and Penelope Ward

Note to self: Ask Santa for glasses this year. When I accidentally mistook a gorgeous man resting outside my building for a homeless person in need of lunch, we got into it. I’d only been trying to do a good deed around the holidays, but he called me righteous. I called him something far worse. If only I didn’t have to see him again. But fate had other plans.

A short story that brings back several of Colleen’s most beloved characters. Told from the point of view of Daniel from Finding Cinderella, readers will finally get the story they’ve been begging for more of. For the best reading experience, make sure you’ve read all three books that come together to make up this heartwarming and fun holiday short story; Finding Cinderella, Hopeless and All Your Perfects.

What’s Christmas with the Starks like? Get a peek into the Rock Chick world and how Luke copes with Ava going Christmas gaga and just what he will, and won’t, do for his girls during the holidays.

Just Say When by Jill Shalvis

When the one you want …

Is the one you can’t seem to have…

Can love conquer all?

The Pact by Elle Kennedy

Thanks to my hectic schedule as a pro hockey player, my girl and I are spending more time apart than together. Luckily, I have a solution—a romantic New Year’s Eve getaway in the mountains, just me and Grace and plenty of sexytimes. Except this blizzard has other ideas…

The Package by K. Bromberg

Christmas week can’t get any worse for Jules Jilliland. Dumped by her boyfriend, rear-ended on the freeway, and fired from her job, she finds herself stuck in an elevator with a handsome stranger. When their packages are accidentally swapped, will it end up being a misfortunate accident that suddenly brightens her holidays?

I saw Colleen Hoover talking about this book on Instagram (you can follow me here) and I instantly went to download it. This is also the first book that I started reading when I was coming out of the terrible flu that hit my house and it really helped get me out of my funk and back in the holiday spirit. I will be doing mini reviews for all the stories because my feelings were all over the place when it came to this collection of stories.

This was a really cute heartwarming romance. I love the way Piper and Mason met. It was such a fun introduction to the two of them and the rest of the story was just as cute.

I was the most excited to read this story because Colleen Hoover took two of her stories and wove them together in this short story. Graham and Quinn are my favorite of her couples and their book, All Your Perfects put me into a month long book hangover earlier this year. I was so excited to read about what they are doing now and this book did not disappoint. I have never read any of Hoover’s YA books and I don’t think I will in the future. I felt for Daniel and Six and the heartbreak they were going through but I don’t think I would connect to either of them if there wasn’t this huge trauma they were dealing with.

I didn’t really like this story at all. Of course I have never read any of her previous books in this series so I’m sure that is why. If I was already familiar with these characters going in then I would have had a stronger connection to them. Without that background this story just fell flat and I felt nothing for anyone. I am the kind of romance reader that needs to be invested in the romance to enjoy he payoff of the spicer scenes and I ended up just flipping though that part. Maybe in the future I will have a chance to read some Kristen Ashley and have a better appreciation for her work.

This story didn’t work for me purely because it has the miscommunication trope in it which is my least favorite thing to read. Well, it’s mostly not clarifying statements they made when they were first dating, but still with only two chapters it ended up just being an ok romance to me. The ending was very cute though and I’m happy I’m read it for that.

This was a sweet and sexy hockey holiday romance (say that five times fast!). Grace and Logan are in two different places in life since Grace is still in school and Logan is a rookie pro hockey player. The story centers around them trying to figure out how to make time for their relationship and making sure that they stay a priority to each other. This was seriously so cute and I love Grace and Logan a lot which speaks to how great of an author Elle Kennedy is. I will for sure be making Elle Kennedy’s books a priority in 2020. I can’t believe I have been sleeping on this author for so long!

I love the premise of this story. It was such a fun idea that worked really well. Archer and Jules were both great characters and I liked seeing them get to know each other better. The story was a little predictable but for a holiday feel good romance this hit all the boxes.

One thought on “Holiday Romance: All Wrapped Up for the Holidays”