A young British couple are driving through France on holiday when they stop for gas. He runs in to pay, she stays in the car. When he returns her car door has been left open, but she’s not inside. No one ever sees her again.

Ten years later he’s engaged to be married; he’s happy, and his past is only a tiny part his life now. Until he comes home from work and finds his new wife-to-be is sitting on their sofa. She’s turning something over in her fingers, holding it up to the light. Something that would have no worth to anyone else, something only he and she would know about because his wife is the sister of his missing first love.

As more and more questions are raised, their marriage becomes strained. Has his first love somehow come back to him after all this time? Or is the person who took her playing games with his mind?

She’s your best friend.
She knows all your secrets.
That’s why she’s so dangerous.
A single mother’s life is turned upside down when her best friend vanishes in this chilling debut thriller in the vein of Gone Girl and The Girl on the Train.

It starts with a simple favor—an ordinary kindness mothers do for one another. When her best friend, Emily, asks Stephanie to pick up her son Nicky after school, she happily says yes. Nicky and her son, Miles, are classmates and best friends, and the five-year-olds love being together—just like she and Emily. A widow and stay-at-home mommy blogger living in woodsy suburban Connecticut, Stephanie was lonely until she met Emily, a sophisticated PR executive whose job in Manhattan demands so much of her time.

But Emily doesn’t come back. She doesn’t answer calls or return texts. Stephanie knows something is terribly wrong—Emily would never leave Nicky, no matter what the police say. Terrified, she reaches out to her blog readers for help. She also reaches out to Emily’s husband, the handsome, reticent Sean, offering emotional support. It’s the least she can do for her best friend. Then, she and Sean receive shocking news. Emily is dead. The nightmare of her disappearance is over.

Or is it? Because soon, Stephanie will begin to see that nothing—not friendship, love, or even an ordinary favor—is as simple as it seems.

A Simple Favor is a remarkable tale of psychological suspense—a clever and twisting free-fall of a ride filled with betrayals and reversals, twists and turns, secrets and revelations, love and loyalty, murder and revenge. Darcey Bell masterfully ratchets up the tension in a taut, unsettling, and completely absorbing story that holds you in its grip until the final page. 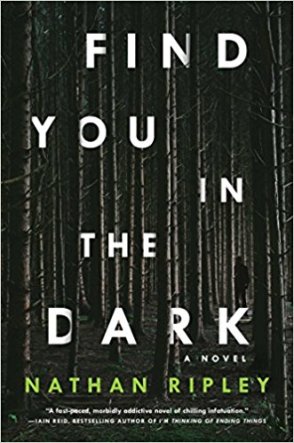 A chilling debut thriller in the vein of Dexter and The Talented Mr Ripley.

Martin Reese has a hobby: he digs up murder victims. He buys stolen police files on serial killers, and uses them to find and dig up missing bodies. Calls in the results anonymously, taunting the police for their failure to do their job.

Detective Sandra Whittal takes that a little personally. She’s suspicious of the mysterious caller, who she names the Finder. Maybe he’s the one leaving the bodies behind. If not, who’s to say he won’t start soon?

As Whittal begins to zero in on the Finder, Martin makes a shocking discovery. It seems someone—someone lethal—is very unhappy about the bodies he’s been digging up.

Hunted by a cop, hunted by a killer. To escape and keep his family safe, Martin may have to go deeper into the world of murder than he ever imagined.

When Betts meets Aiden at the candy store where she works, their connection is like a sugar rush to the heart. Betts already knows the two of them are infinite. Inevitable. Destined to become an us.

Betts has only ever kept one secret from her best friend, Jo, but suddenly there’s a long list of things she won’t tell her, things Jo wouldn’t understand. Because Jo doesn’t see how good Aiden is for Betts. She finds him needy. Possessive. Controlling.

She’s wrong. With a love like this, nothing else matters.

The Bram Stoker Award-winning author of A Head Full of Ghosts adds an inventive twist to the home invasion horror story in a heart-palpitating novel of psychological suspense that recalls Stephen King’s Misery, Ruth Ware’s In a Dark, Dark Wood, and Jack Ketchum’s cult hit The Girl Next Door.

Seven-year-old Wen and her parents, Eric and Andrew, are vacationing at a remote cabin on a quiet New Hampshire lake. Their closest neighbors are more than two miles in either direction along a rutted dirt road.

One afternoon, as Wen catches grasshoppers in the front yard, a stranger unexpectedly appears in the driveway. Leonard is the largest man Wen has ever seen but he is young, friendly, and he wins her over almost instantly. Leonard and Wen talk and play until Leonard abruptly apologizes and tells Wen, “None of what’s going to happen is your fault”. Three more strangers then arrive at the cabin carrying unidentifiable, menacing objects. As Wen sprints inside to warn her parents, Leonard calls out: “Your dads won’t want to let us in, Wen. But they have to. We need your help to save the world.”

Thus begins an unbearably tense, gripping tale of paranoia, sacrifice, apocalypse, and survival that escalates to a shattering conclusion, one in which the fate of a loving family and quite possibly all of humanity are entwined. The Cabin at the End of the World is a masterpiece of terror and suspense from the fantastically fertile imagination of Paul Tremblay.

An unspeakable crime. A confounding investigation. At a time when the King brand has never been stronger, he has delivered one of his most unsettling and compulsively readable stories.

An eleven-year-old boy’s violated corpse is found in a town park. Eyewitnesses and fingerprints point unmistakably to one of Flint City’s most popular citizens. He is Terry Maitland, Little League coach, English teacher, husband, and father of two girls. Detective Ralph Anderson, whose son Maitland once coached, orders a quick and very public arrest. Maitland has an alibi, but Anderson and the district attorney soon add DNA evidence to go with the fingerprints and witnesses. Their case seems ironclad.

As the investigation expands and horrifying answers begin to emerge, King’s propulsive story kicks into high gear, generating strong tension and almost unbearable suspense. Terry Maitland seems like a nice guy, but is he wearing another face? When the answer comes, it will shock you as only Stephen King can.

The beloved coming-of-age tale of a spunky heroine named Anne “with an E,” now for the first time in Penguin Classics and packaged in a Deluxe edition.
L. M. Montgomery’s novel Anne of Green Gables recounts the adventures of Anne Shirley, an 11-year-old orphan mistakenly sent to a pair of siblings who intended to adopt a boy to help work on their farm in Prince Edward Island. Yet Anne’s quirky personality and good-natured spirit causes the siblings to grow to love her anyway, and soon the entire town falls for the precocious little girl with bright red hair.
Cherished by both children and adults, Anne of Green Gables is a celebration of fierce individualism, and the families we create, rather than the ones we are born into. This Deluxe edition is enhanced with a foreword by bestselling author J. Courtney Sullivan, and an introduction and suggestions for further reading by Benjamin Lefebvre, as well as reviews and a selection of early writing by L. M. Montgomery about the process of writing Anne.

Sorry that I’m posting this so late in the month but man this summer is flying by and I seriously don’t know where all the time is going. My kids go back to school in just over a month! How that is even possible I don’t know. I did pretty good book buying last month until I had to go to Barnes and Nobles for my bother’s birthday present and I just had to buy a bunch of books for myself (and two each for all my boys :)). While I was looking around the kids section I found this beautiful copy of Anne of Green Gables and I just had to buy it. It’s been really fun reading it with my boys and they think her way of life is so fascinating. I hope you are all having a great summer!